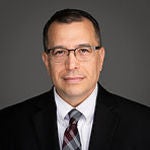 Mr. Vidrio focuses the bulk of his practice on criminal defense and personal injury cases though he has experience in civil litigation as well.  Mr. Vidrio combines his life experience, law enforcement background, and his legal training to bring about the best result possible for each client.

Mr. Vidrio was drawn to the practice of law after spending over eight years working as a police officer. Mr. Vidrio saw firsthand how the court system worked for many different people and decided he could better serve as an advocate for those in need. Mr. Vidrio decided to advance his education and went on to complete his undergraduate degree at Western Oregon University while working a demanding graveyard shift with the Salem Police Department. Determined to succeed, Mr. Vidrio obtained his degree while managing his career in law enforcement and raising a young family. After graduation from Western, Oregon University Mr. Vidrio was accepted to Willamette University College of Law.

​Prior to joining the firm in 2009, Mr. Vidrio worked for a large insurance defense firm in Portland, Oregon where he learned civil litigation practices and came to understand the challenges clients face in the area of personal injury cases.  As a police officer for over eight years, Mr. Vidrio received specialized training as a field sobriety test instructor and Drug Recognition Expert. Mr. Vidrio's law enforcement background provides unique insights in the criminal defense field because he knows where to look when assessing an investigation by law enforcement.

Mr. Vidrio is an adjunct instructor at Western Oregon University, where he teaches American Jurisprudence and Constitutional law. Mr. Vidrio is a proud veteran of the United States Marine Corps and understands the challenges faced by veterans.  When not at work, Julio enjoys spending time with his wife and two daughters.

Client charged with manslaughter resulting from a car crash. Mr. Vidrio worked to uncover additional facts not found during the initial investigation. After a thorough review of the evidence, including the defense investigation, Mr. Vidrio successfully negotiated the dismissal of all charges.

Client charged with manslaughter in a shooting death. Mr. Vidrio identified a self-defense claim because the client was carrying a licensed concealed handgun and the person shot was attacking the client. Mr. Vidrio used his background to demonstrate that not only was his client fully within his second amendment rights to carry a gun, but also within his rights to defend himself. The client was acquitted of all charges and is free today.
​
Mr. Vidrio represented a client who was seriously injured in a crash. Mr. Vidrio used his insurance defense background to navigate through the complicated layers of insurance coverage and was able to get the maximum payout for his client.